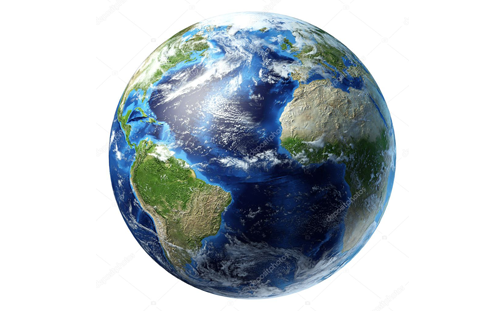 30 Jun Planetary boundaries: what are we talking about?

Within the framework of the TEDDA project activities, it is important to understand and develop different notions linked to the ecological transition. After the carbon footprint, we will develop the notion of “Planetary Boundaries”.

The notion of planetary boundaries was defined in 2009 by 26 international researchers from the Stockholm Resilience Centre.

According to this concept, nine processes and systems coordinate the stability and resilience of the interactions of the Earth, ocean, atmosphere and life, and together they create the conditions of existence on which our society depends. Limits are set for each of them that must not be exceeded or the stability of the system and thus the hospitality of the Earth will be lost. Here they are: 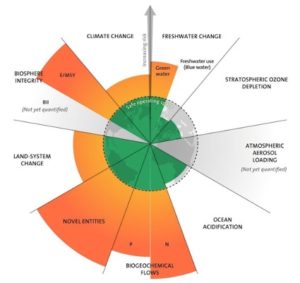 It has since been updated by regular publications. The Earth crossed two new limits in the spring of 2022 (it had already crossed four in the past): that of the freshwater cycle, and that of chemical pollution.

In 2012, the economist Kate Raworth (the economist behind the ‘Doughnut Theory’) proposed to add to these natural, external planetary limits (‘ceiling’), internal limits (‘floor’), corresponding to the essential human needs for good living. It lists 11 distinct dimensions of life, forming the ‘social floor’. The planetary limits and the dimensions of life can be represented in a ring (a donut) and form a grid for studying the interactions between the state of the environment and human needs.

The aim of this theory? To rethink the economy in order to meet basic human needs and preserve the environment.

To go further and understand its concrete application see: the application of the theory in Amsterdam ( https://www.kateraworth.com/2020/04/08/amsterdam-city-doughnut/ ) or the Brussel Donuts project: https://donut.brussels/projet/

However, experts warn, these limits are estimates: We don’t know how long we can keep pushing these boundaries before the combined pressures lead to irreversible changes and damage.

The observations are all the more serious because climate is not the only factor under serious attack. Biodiversity, although a condition for the resilience of the biosphere, is under threat. The biogeochemical cycle of nitrogen and phosphorus has been severely destroyed by intensive industrial agriculture, creating huge dead zones in the ocean. Deforestation has created an imbalance between the water and climate cycles that is now global in scope.

In fact, our transgressions of the nine planetary limits have been and are still so great that geologists believe we have entered a new era in Earth’s history. The beginning of the Anthropocene.

As pressure on the natural environment increases, many scientists say that the Earth has moved from the Holocene, a geological period associated with the stability of the Earth’s habitat over the past 10,000 years, to a new era: the Anthropocene.

Using the term ‘Anthropocene’ (or Capitalocene) for the first time in 2000, Paul Crutzen points out that ‘the human footprint on the planetary environment has become so vast and intense that it rivals some of the great forces of Nature in terms of its impact on the Earth system’ (Bonneuil and Fressoz, 2016).

The dawn of the Anthropocene should serve as a warning. The transition must therefore not only be climatic, but ecosystemic. Therefore, we must prioritise solutions that tackle the root of the problem and stop believing that technology alone can help us avoid crossing planetary boundaries… Respecting these constraints requires economic, social, cultural, political and even geopolitical innovation. In other words, it must go beyond another limit: that of our imagination.